At Jim Beam, whiskey making is a family tradition. So, it only makes sense that Freddie Noe, son of Fred Noe and grandson of legendary Booker Noe, would eventually get his shot. Surprisingly, however, Freddie’s first release under the Beam label will not be a bourbon. Instead, “Little Book”(the nickname given to Freddie by Booker) will be the first expression in an annual limited edition blended whiskey series. 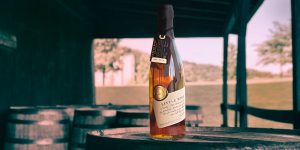 According to reports, the brand will feature a unique blend each year that will be uncut and unfiltered to honor Booker Noe and his signature product, Booker’s Bourbon. The 2017 release is said to be a blend of four year old Kentucky Straight Bourbon and twelve to thirteen year old corn whiskey, rye and malt whiskey.

Tasting notes are non-existent, but it’s safe to say that it will be unlike any Beam product to date. Little Book clocks in at a robust 128.6 proof and will be available in stores in October 2017 for a reasonable $79.99.

Taste For A Cure!
Scroll to top