George Remus – The King of the Bootleggers

George Remus is known mostly as a bootlegger during the Prohibition era, but was also a heck of a lawyer. It has been claimed that he was the inspiration for the title character Jay Gatsby in The Great Gatsby by F. Scott Fitzgerald.

For those who love bourbon, you know how deeply rooted our passion is with one some of the craziest stories you’ve ever heard. This is certainly one of them, so pour a tall one and enjoy!

George Remus specialized in criminal defense and became rather famous, he was the Prohibition equivalent of Johnnie Cochran.

Alcohol Prohibition began on January 17, 1920 with ratification of the 18th Amendment which turned into a profitable opportunity for Remus. His criminal clients were raking in cash at a rapid pace which smelled like opportunity for an educated attorney. 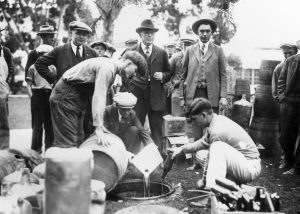 Get Money, Get Paid

In a few short years, George Remus was earning $50k a year, which is a touch under the US median household income today, and is roughly $600,000 in the modern day income (more than the NFL minimum salary). It is said that George Remus studied the Volstead Act (Prohibition Act) intensely to find every available opportunity to circumvent the law. His goal was to buy Distilleries to produce whiskey that was bottled-in-bond to use for medicinal purposes.

Cincinnati held a large chunk of America’s bonded whiskey, so that’s where George invested by buying what he could. In under three years George Remus made $40 million alongside George Conners. He owned a handful of famous distilleries, including the Fleischmann Distillery.

George Remus is known as the “King of the Bootleggers” and in 1925, he was indicted for thousands of violations of the Volstead Act, convicted by a jury, and given a two-year federal prison sentence which he served in Atlanta, Georgia. While he was in prison, Remus confided in another inmate that his wife, Imogene Holmes, had control over his money. This is where the story gets good. The inmate was an undercover prohibition agent Franklin Dodge, who was placed in prison to gather this info from Remus. Franklin Dodge then resigns and begins an affair with Imogene rather than reporting the info. In addition, Remus’s Fleischmann Distillery was sold by his wife, Imogene Holmes. It’s said the Imogene later only gave George Remus $100 of the millions she possessed of his.

In 1927, Imogene Holmes attempted to divorce Remus and on the way to court, Remus had his driver chase her through Eden Park in Cincinnati. The chase ended when her cab was forced off the road. Remus got out of his car and shot Holmes in the abdomen, killing her in front of onlookers.

The former President William Howard Taft’s son was the prosecutor in the murder where George Remus defended himself. He plead temporary insanity and was acquitted in under 20 minutes of deliberation, he really was the Prohibition Johnnie Cochran.

George moved to Covington, Kentucky just south of Cincinnati where he lived out the remainder of his life. That’s your Bourbon History for today.

Request to Join the Bourbon Sippers Facebook Group below and find more on our Bourbon Blog – Slurred Speech!