Amongst the Bourbon Whiskey community there are a handful of unwritten rules. Somewhere toward the top of that list is, don’t tell anyone how to drink their whiskey.

When I first got into bourbon whiskey, I did what everyone did, I swirled my glass… Why?

I saw other people do it and it was cool to see the “legs” run down the side of the glass since they moved slower than water.

At one point or another we have all swirled whiskey, immediately nosed it just to be met with a sinus full of pain. Why? Bourbon has a high ABV and alcohol evaporates upon agitation, oh and sniffing alcohol stings the nostrils.

This is precisely why wine is swirled in the glass, as the alcohol evaporates out of the glass it brings aromas with it. Wine is usually in the neighborhood of 11-14% ABV so there isn’t nearly as much alcohol to dominate the senses as there is with bourbon which is usually 40-70% ABV.

A few months back we were picking a Private Barrel of Four Roses with an awesome liquor store out of San Francisco Maison Corbeaux (Available Online Soon) and sparked a great discussion around whether or not we should swirl whiskey. We mentioned that we were unique from a lot of people in the community since we don’t swirl our whiskey prior to nosing or sipping it.

We wanted to test our theory so we did a blind experiment to see how this would play out. 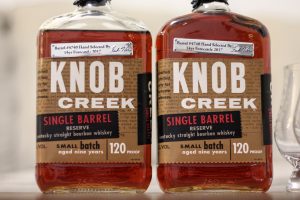 Bottle #1: We opened moments before starting our Swirled Whiskey Experiment.
Bottle #2: We opened 1-week prior, had a pour and re-corked it to be used for this experiment. 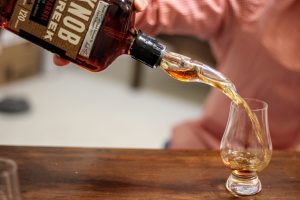 Both participants were blindfolded and handed a glencairn in random order. Both were instructed to nose and taste it while providing audible feedback. We switched testers and repeated the experiment again in random order before tallying the results.

Tester #1 (order they were tasted)

D. Soft, Smooth, Sweet
C. Nose caught me off guard, Much Spicier and shockingly harsh relative to previous pour
E. Not as harsh as previous pour, not very hot
B. Nose was a big shock, palate was spicy like #3, very harsh and not pleasant
A. Soft nose, Palate had a light onset, no shock but the finish was rough.

Tester #1 (Ranking in order of preference)

Tester #2 (order they were tasted)

D. Smooth, bite on the backend, finish had a deep spice
B. Audible gasp “whoah”, shockingly harsh, middle heat, noticeably more powerful than previous pour
A. “Whoa” even more shocking than the last one, not as spicy, not as much complexity
D. (We did this twice to throw off the tester) – Smooth front, Middle-back heat
C. Strong, really strong, shocks you, not complex just one big punch
E. Not nearly as shocking as the pour before, spicy onset and really good finish.

Tester #2 (Ranking in order of preference) 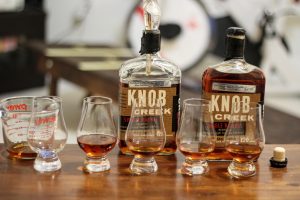 What can we make of all this?

You shouldn’t swirl your whiskey, damnit.  Okay, maybe that was a bit too harsh.  We recognize we need to do this experiment a few more times using different whiskeys at different proofs to see if recipes and proofs have different results. This is just a start to open the conversation, if you’re pushing back without trying it we’re going to challenge you to prove us wrong.

One theory is that there may be a sweet-spot for swirled whiskey, maybe a 90 proof bottle tastes better.  We will withhold our final judgement on lower proof bourbon whiskey until we publish an updated article. Until then, do your own blind test and tell us how it goes.