The state of Kentucky is The Napa Valley of Bourbon… Over 1 MILLION visitors flock to the Bourbon Holy Land each year to experience a Mecca-like experience over the “brown water” so many have learned to give their time, money, and energy to.

There’s just one catch, and it’s a big one… Visitors can spend thousands of dollars on travel, lodging, and touring these beautiful Bourbon shrines known as distilleries only to find out that they aren’t able to ship bourbon back home. Yep, you heard that right. It has historically been illegal to ship bourbon in the mail, even for the distilleries that produce 95% of the bourbon in the world.

Many distillers have claimed the law hurts their sales as they hear complaints day in and day out of people who take their tours, try their products, and ultimately want to buy a couple bottles to ship back home, but find out they cannot. Visitors leave disappointed and feeling like they’ve “missed out” on the opportunity to buy a bottle directly from the grounds it was produced on.

This week, HB400, a bill that allows distillers to ship bourbon directly to consumers passed, and distillers & Bourbon Sippers everywhere are celebrating! But should everyone unanimously be excited?

Distillers like Joe Heron, Founder of Copper and Kings believe the passing of HB400 will immediately increase their sales and contribute to positive experiences for distillery visitors.

“I’m 1,000 percent in support of this bill,” Heron said. “For the whole state, millions of people coming in, imagine if all of them just bought two more bottles. You can have bourbon, or a brandy or a gin-of-the-month club.”

But what does HB400 really mean? Does it mean Bourbon Sippers across the U.S. will be able to order rare releases or allocated bottles directly from the distillery as so many hope? Before you jump on the phone with the Buffalo Trace Distillery to see if they can ship you a few bottles of Blanton’s, you should probably hold off, because you won’t get very far… 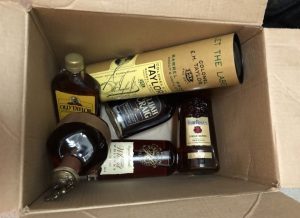 The two caveats to HB400 are as follows

1.)Consumers can have bottles shipped (9 liters maximum per visitor) directly to their homes ONLY after visiting and/or touring the actual distillery the bottles are being shipped from

2.) Consumers can “Subscribe” to a Bourbon of the Month Club IN PERSON at the distillery while visiting (maximum of 9 liters per year to be shipped directly to consumer by distillery)

The fine folks passing legislature in the beautiful state of Kentucky are intelligent people, and they know the end goal of HB400 is to ultimately continue fueling Bourbon Tourism. If you don’t visit the Bluegrass State and walk into the distillery gift shop directly, no Bourbon shipments for you!

For the majority of Bourbon Sippers everywhere else who aren’t visiting Kentucky on a regular basis, you’ll be better off still hitting up your local stores in search of bottles that are waiting on shelves ready to be taken home with no shipping required.

Life on the Kentucky Bourbon Trail

5 Cheap Bourbons You Can Enjoy Guilt Free
Scroll to top