Already dealing with a massive cleanup effort, the Barton 1792 distillery will be facing another massive hangover this holiday with thousands of bourbon barrels adding to the mess. 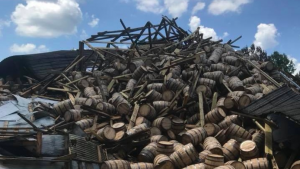 As we were sippin’ bourbon and smoking brisket and ribs, we heard the news that the other half of warehouse 30 collapsed.

This is a tough one to swallow for the distillery and we’re hoping nobody was hurt and that they bounce back from this bummer.