The 12 year old bourbon is generally a decent pour, but due to the limited availability and unique bottle design, the hype on this one is high. 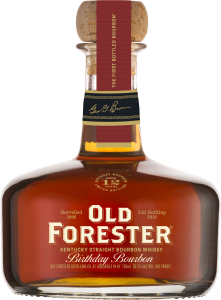 2018 Old Forester Birthday Bourbon has a MSRP of $99.99 but isn’t as limited as you might imagine. 120 barrels were selected for the 2018 expression which produces over 28,000 750ml bottles. Of course each state won’t get an equal distribution, but if they did, that would break down to almost 600 bottles per state. These bottles will go to both bars and liquor stores, so if this happens to be one of your favorites, you should be able to find it if you try hard enough.

Of note, this is the first Old Forester Birthday Bourbon vintage to be bottled at the new Old Forester Distilling Co. on Louisville’s Historic Whiskey Row.

Why the lack of enthusiasm on this one from us? Blame Old Forester, they released the 1920 Prohibition Style which was a lot easier to find and half the price. With that said, if we come across a bottle of 2018 Old Forester Birthday Bourbon, we’ll likely pick it up.

Here are the notes from the Old Forester website:

NOSE
– Singularly focused initially with a pronounced rich dark cherry cobbler note opening into a dynamic build of caramel and dark chocolate covered smoked almond nuttiness with hints of charred oak. A touch of herbal lemon tea sweetened with a touch of honey round out its depth of character.

TASTE
– Subtle sweetness blossoms into a warm and green spiced multi-dimensional experience, brightened by a lemon honey note followed by a cherry cobbler.

FINISH
– Long and drying with an herbal lemon honey sweetness.

6 Craft Whiskeys You Should Be Drinking
Scroll to top