If I’ve learned anything from the whiskey business it’s that people love a good bourbon story. Whether the liquid survived a legendary tornado strike or visited five continents aboard a research vessel, bourbon with a cool backstory is bourbon we want to drink. Such is the case with Jos A. Magnus and Co.’s Joseph Magnus Straight Bourbon Whiskey. While the Magnus story doesn’t include a natural disaster or a transoceanic voyage, it does involve a bourbon resurrection, and that should be more than enough to pique your curiosity. 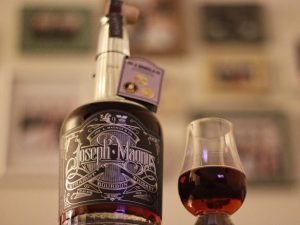 The Story:
Joseph Magnus, a once highly regarded pre-prohibition distiller, originally founded Joseph Magnus & Co. in 1895 in Cincinnati, Ohio. Although Magnus’s flagship product, Murray Hill Club Whiskey, was considered one of the finest whiskeys on the market at the time, the brand slowly faded into obscurity after prohibition forced the distillery to close its doors in 1918. However, in a stroke of fate, Joseph’s great grandson, Jimmy Turner, uncovered an original bottle of Magnus bourbon in his mother’s home in 2007. With the help of a veritable who’s who of whiskey experts (including former Woodford Reserve Distiller Dave Scheurich, former Buffalo Trace VP and General Manager Richard Wolf, and famed Master Blender Nancy Fraley), Turner embarked on a journey to not only understand the contents of the bottle, but to recreate it. The result? The reestablishment of Jos. A. Magnus & Co. distillery in 2015 and the introduction of Joseph Magnus Straight Bourbon Whiskey. The base of the 21st Century version of Magnus is a sourced eight-year bourbon from MGP (Lawrenceburg, IN) that is said to be reminiscent of the original bottle Turner discovered. The bourbon is then finished in a combination of sherry and cognac barrels to mimic the process Joseph Magnus likely used to create his signature whiskey over a century ago. The end product is said to be so similar to the 100-year-old bottle that Fraley, while once tasting a sample of the new product, thought she was drinking the original Magnus. Here’s to bourbon resurrection… 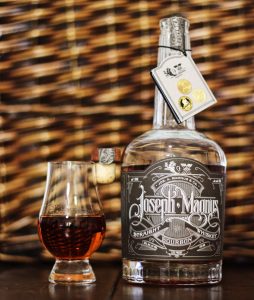 Appearance:
Dark amber/golden brown in color with hues of deep red that shine through along the outer edge.

Nose:
Chocolate covered cherries right up front, followed by layers of orange zest, brown sugar, caramel, and warm alcohol. Deep in the glencairn you get hints of sweet cinnamon and cloves that meld with the orange to produce a mulled wine character. An impressive, complex nose.

Neat:
The entry is thick and heavy with chocolate initially dominating. The mid-palate progresses to black cherries, red hots, more orange zest, and a funky, earthiness that I associate with full-bodied wines. The finish is long and somewhat bitter with dark chocolate, coffee, and finally a cola-like sweetness. The sherry finish definitely comes through here, but I can’t say that I pick up any Cognac influence (I typically get more vanilla from Cognac casks).

With water:
Water tames the alcohol and cherries a bit and brings out some sweet mint and honey notes. Most of the original flavors are there, just muted. The finish is heavy on spice and leaves a slight, but lingering alcohol burn that fades to vanilla. In the end, I don’t think water improves the dram. Keep it neat.

Conclusion:
My expectations were understandably high when I heard that Joseph Magnus was awarded a prestigious Double Gold medal and named Best Special Barrel-Finished Bourbon at the San Francisco World Spirits Competition in 2016. I was not disappointed. This is a dark, brooding bourbon that deftly balances sweet and powerful, while ultimately delivering on both fronts. I only have two minor critiques. First, I really wanted the Cognac finish to be more assertive, but that may never have been the intention. Instead, maybe the role of the Cognac cask was to subdue or nuance the sherry influence? And second, the retail price, which I’ve seen as high as $90, is a bit steep for most casual drinkers. Whether the bottle is worth the cost is a personal decision, but my guess is that most will not regret their purchase.

Bottom line:
Joseph Magnus Straight Bourbon Whiskey is a well-crafted, intriguing bourbon that both novice and experienced drinkers will enjoy. I have never tried the original Magnus, but if it tasted anything like the 21st Century rendition I can understand its lofty reputation.

The Legend of Jim Rutledge